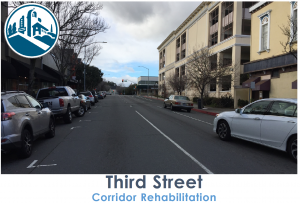 One of the major improvements the City would like to make as a part of this project is a separated bicycle connection from Marquard Avenue to Miramar Avenue, in order to achieve the complete street goals. This would fill a gap in the Cross-Marin Bikeway that is supported by the communities along the Miracle Mile corridor. To the west, this bicycle facility would connect to the existing Greenfield Bicycle Boulevard. To the east, this would connect to a future First Street Bicycle Boulevard/Safe Routes to School pathway.  This connection can be found in the San Rafael Bicycle and Pedestrian Master Plan as well. An unfortunate outcome of building the bicycle connection is the likely result in the loss of a few on-street parking on the south side of Second-Third Street from Marquard Avenue to Shaver Street. After receiving feedback from the community, the City revised the original concept that removed on-street parking with the concept that is linked below. This concept preserves several on-street parking spaces. The design team is still working through the construction details and the plans will be posted on this webpage as they are developed.