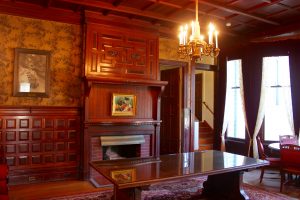 Falkirk, a California Victorian, is an excellent example of a  Queen Anne home, capturing the spirit of early California with its complex, picturesque roof-line of gables and chimneys, variously shaped bays and decorative details.

The mansion was originally built in 1888 in San Rafael by Ella Nichols Park, a wealthy and reclusive young widow. With seventeen rooms, three floors, and a large porch with oversized turned posts, the mansion celebrated country living, although Falkirk’s open floor plan was not common among Victorians. The home and the history of its occupants reflect both the emergence of San Rafael as a fashionable suburb of San Francisco and the growth of rail and shipping industries in the west.

In October 1886, Ms. Park purchased the 11-acre estate from railroad magnate James D. Walker and had his house removed and in February 1888 she commissioned E. F. Chisholm to build her home, designed by architect Clinton Day.  By August of that year, this elegant country home was completed for a cost of $30,000.

After Ella’s death in 1905,  Captain Robert Dollar purchased the estate in 1906. Captain Dollar was born in 1844 in Falkirk, Scotland and became very wealthy, first through the timber industry and later in the shipping business. He founded the Dollar Steamship Company, established trade with the Orient, and began the first regularly scheduled round-the-world passenger/freight line. Captain Dollar is often credited with founding the Merchant Marine. An active member of civic life in San Rafael and one of the drafters of the City Charter, Dollar donated much of the city’s adjacent open space on San Rafael Hill. He also gave lavishly to his hometown of Falkirk, Scotland, where he is fondly remembered today and in October 1988 San Rafael and Falkirk became sister cities.

The Dollars made many revisions to the mansion including a rear addition that was built to house the family of Dollar’s son Harold. Agnes Dollar renovated the grounds in 1927 where she replaced a Victorian garden with the brick steps, pond, and rolling lawns and added a picnic terrace and garage. The newly defined grounds became a showcase for the new wonder and toy of the wealthy – the automobile.

In February 1972, an attempt was made to secure the property from the Dollar family for development. The plans included the destruction of the mansion and all outbuildings. In December the estate was placed on the National Register of Historic Places and a grassroots citizen’s group, Marin Heritage, began a three-year struggle to save the estate for the people of the City of San Rafael. In November 1974 voters approved a four- cent tax to allow for the purchase and maintenance of the estate. Shortly after the mortgage was paid California State Proposition 13 disallowed the tax, leaving the City to maintain Falkirk Cultural Center from the General Operating Fund.

Falkirk now operates as a historic site with tours available upon request. The house and grounds are available for receptions, weddings, and meetings. The center houses a contemporary art gallery and an educational center for cultural arts.