In 1937, Jacob and Annie Albert conveyed nine acres of property by deed to the City of San Rafael for use as a neighborhood park. Over the years, Albert Park underwent improvements and additions including: two ball fields, a stadium, four tennis courts, two playgrounds, a picnic area, the San Rafael Community Center, a formal park entry, the Marin Bocce Complex, Parkside Children’s Center, and parking facilities.  When the Parkside Children’s Center was constructed, one of the park’s playgrounds was replaced with a gated playground designed to serve the Parkside students during weekdays and the public during evenings and weekends.  Within the first year of operation, the Parkside Children’s Center playground was closed to public use due to vandalism. Currently, only the pre-school age playground adjacent to the Community Center is open to the public.

In 2015, the Parks and Recreation Commission conducted a community-wide outreach to determine community priorities for park improvements. The highest priority was a new children’s playground. The project was then recommended to City Council for funding using San Rafael per capita funding through Measure A (Protect Marin Parks, Open Space, and Farmland) as well as the Building and Parkland Dedication Funds.  In June 2016, City Council approved the project in the City’s 3-Year Capital Improvement Program (CIP) for Fiscal Year 2016/17 through 2018/19. 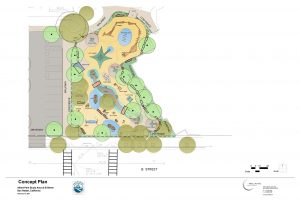 In May 2016, the B Team group was formed by parents and business owners in the Gerstle neighborhood who expressed common concerns for security in Albert Park. This group reported that most residents avoid the park and do not allow children to walk through the area unaccompanied by an adult.  They proposed that the City install a new children’s play area in Albert Park that would replace the existing seating area at the B Street entrance to the park, which currently attracts loitering, garbage, and other undesirable activities.  The Parks and Recreation Commission met with the B Team in July and agreed to form a partnership for community outreach, design, and fundraising for the project.

In the Fall of 2016, the City elected to hire Abey Arnold for landscape architectural services to prepare any initial site opportunities and constraints report, perform public outreach, and develop two to three design concepts for park improvements. Albert Park Playground was added to the 2016/17 Capital Improvement Program for construction in 2017.

Members of The B Team accepted a Community Service Award at the California Park & Recreation Society (CPRS) District 1 Awards and Installation Banquet on February 1, 2020.

The B Team is a small group of neighbors that formed to co-create solutions to community challenges. Driven to increase the amenities in Albert Park to attract more neighborhood users and reclaim the park area as a clean, family-friendly space for all to enjoy, The B Team commitment to be a part of the change by working with City staff to develop a community engagement and fundraising campaign, develop marketing material, organize community clean up days, and remove hardscape. Members served as project ambassadors, hosted fundraising events, and developed relationships with elected officials to increase advocacy.

The B Team is a true champion of our community and a role-model for future community collaboration efforts.

Staff nominated The B Team for the 2019 Community Service Award in recognition for their partnership,  dedication, and community spirit.  Volunteer efforts spanned more than 3 years and culminated with two opening celebrations in April 2019. Staff and the City thank everyone for their time and support. 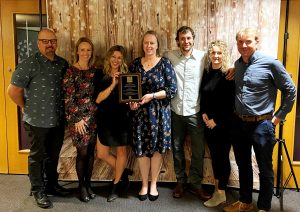 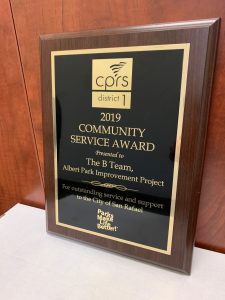 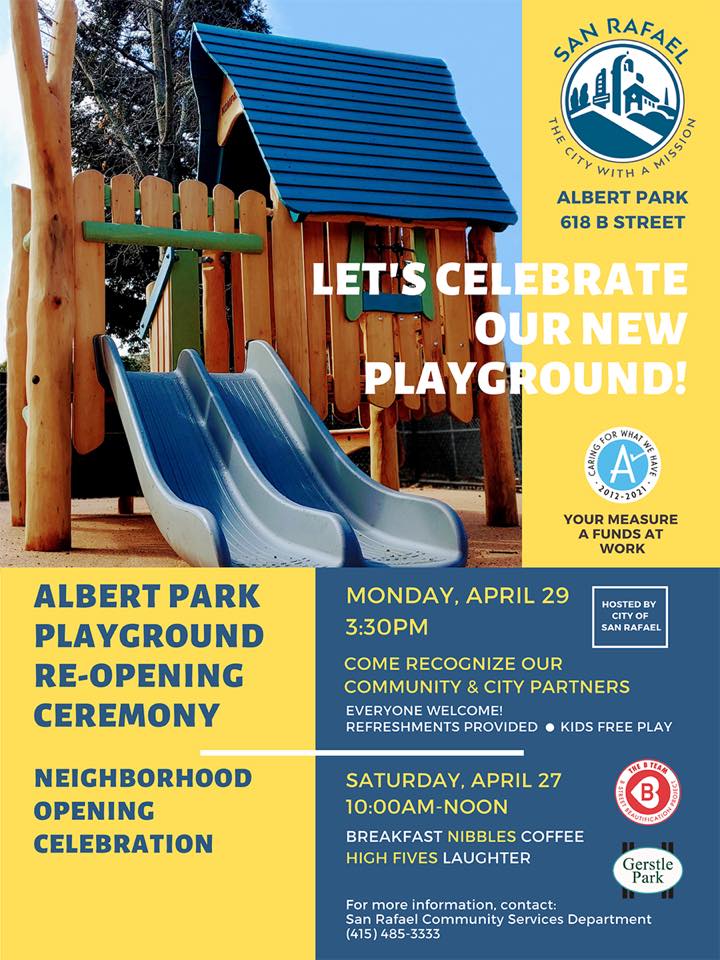 SAN RAFAEL, CA: The City of San Rafael will host a re-opening ceremony for the new Albert Park playground, located at 618 B Street, on Monday, April 29, 2019 at 3:30 p.m. This event will celebrate the completion of a multi-year endeavor to bring new and inclusive playground equipment to Albert Park. The ceremony will...

Join us on April 29 at 3:30 p.m. for the official re-opening of the Albert Park Playground. Help us celebrate our community partners, donors, and staff for making this project such a success! Refreshments will be provided. The playground is located at 618 B Street between the San Rafael Community Center & Marin Bocce Federation.... 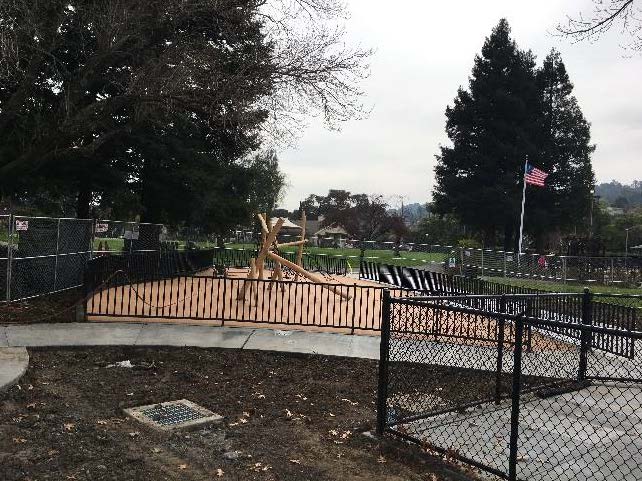 The City’s contractor, M3 Integrated Services, has installed the resilient rubber surfacing at the Albert Park play area. The landscapers were out this week starting some beautification improvements to the park. Once the final touches have been completed the City will be holding a ribbon cutting ceremony which is scheduled for April 29th at 3:30... 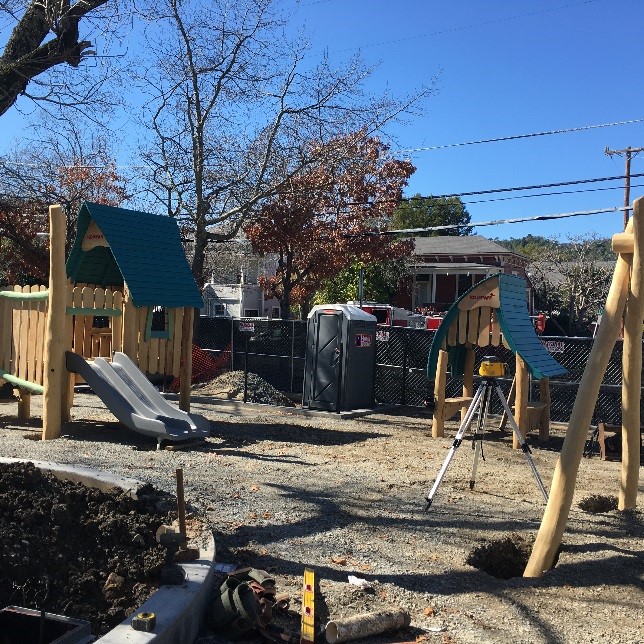 The City’s contractor M3 Integrated Services has installed the playground equipment and is on track to install the resilient rubber surfacing the first week of March. Next week they will be working on the sidewalk between the Marin Bocce Federation and the B Street community center. 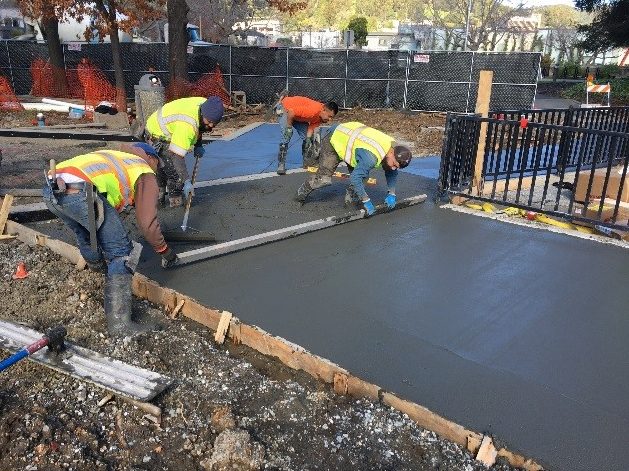 The City’s contractor M3 Integrated Services poured the first of sidewalk this week and they have also started to assemble the playground equipment. The park is scheduled to open in April.