On August 17, 2020, the San Rafael Police Department brought proposed changes to the Use of Force Policy (Policy 300 of the Police Procedural Manual) to the City Council. The City Council voted unanimously to accept these changes. Here are a few highlights of the changes:

This preface is essentially an introduction by the Chief of Police about her philosophy of policing and vision for the Police Department. Chief Bishop’s preface highlighted the disproportionate use-of-force against people of color and the underlying inequities in policing, as well as, the role of leaders to drive change. More importantly, it emphasizes SRPD’s guiding principle: the reverence for human life.

Ban on Chokeholds and Strangleholds

The language of the Carotid Control Hold policy was considered to be longwinded. The original language went into the details of when, how, and where to use chokeholds. However, since SRPD does not train on this hold and had already banned its use, most of the language was obsolete and the revised policy reflects this ban succinctly.

SRPD conducts training on an ongoing basis. All training is chronicled, and the State of California regularly audits the police department to make sure required training courses are documented properly.

Providing a verbal warning before an application of deadly force is the default and should always take place, unless it is not feasible and/or the officer has objectively reasonable grounds to believe the person is aware they are a peace officer and that deadly force may be used.

Monitoring situations and responding to them in an appropriate manner is an essential aspect of policing. This includes communicating with subjects, maintaining distance, and limiting the use of force when responding to calls. SRPD incorporated de-escalation as part of defensive tactics, firearms, and lethal weapons curriculum for decades.

Shooting at a moving vehicle is banned, unless the officer sees no other alternative to avert the imminent threat of the vehicle. 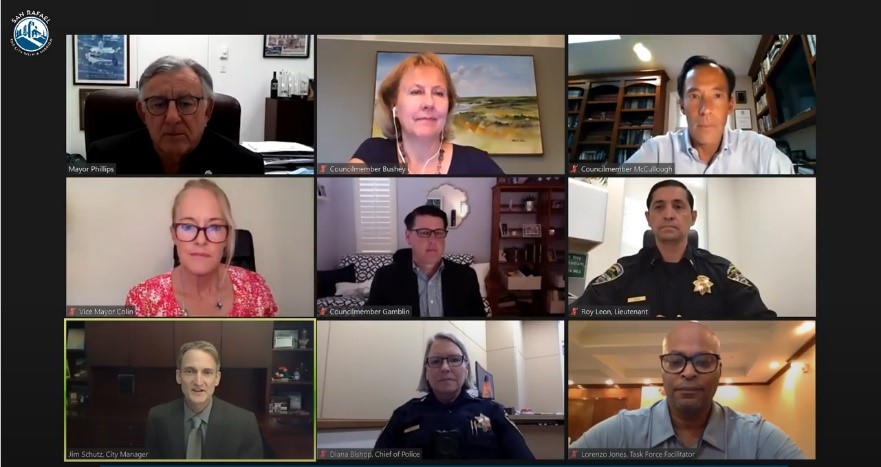 These proposed changes weren’t created overnight; it was a collective effort from a task force consisting of seven members of the public, City staff, and elected officials. The task force met twice virtually over the course of the last few weeks to discuss how key elements of the #8cantwait campaign can be incorporated into the current police policy manual.

The City Council’s acceptance of the proposed changes  is just the beginning of the race and equity conversation. The Mayor has appointed Vice Mayor Kate Colin and Councilmember John Gamblin to take on the next phase of this effort.

We want to continue hearing from you! Please submit via our online form. You may also subscribe to the City’s Racial and Social Equity page for automatic updates.