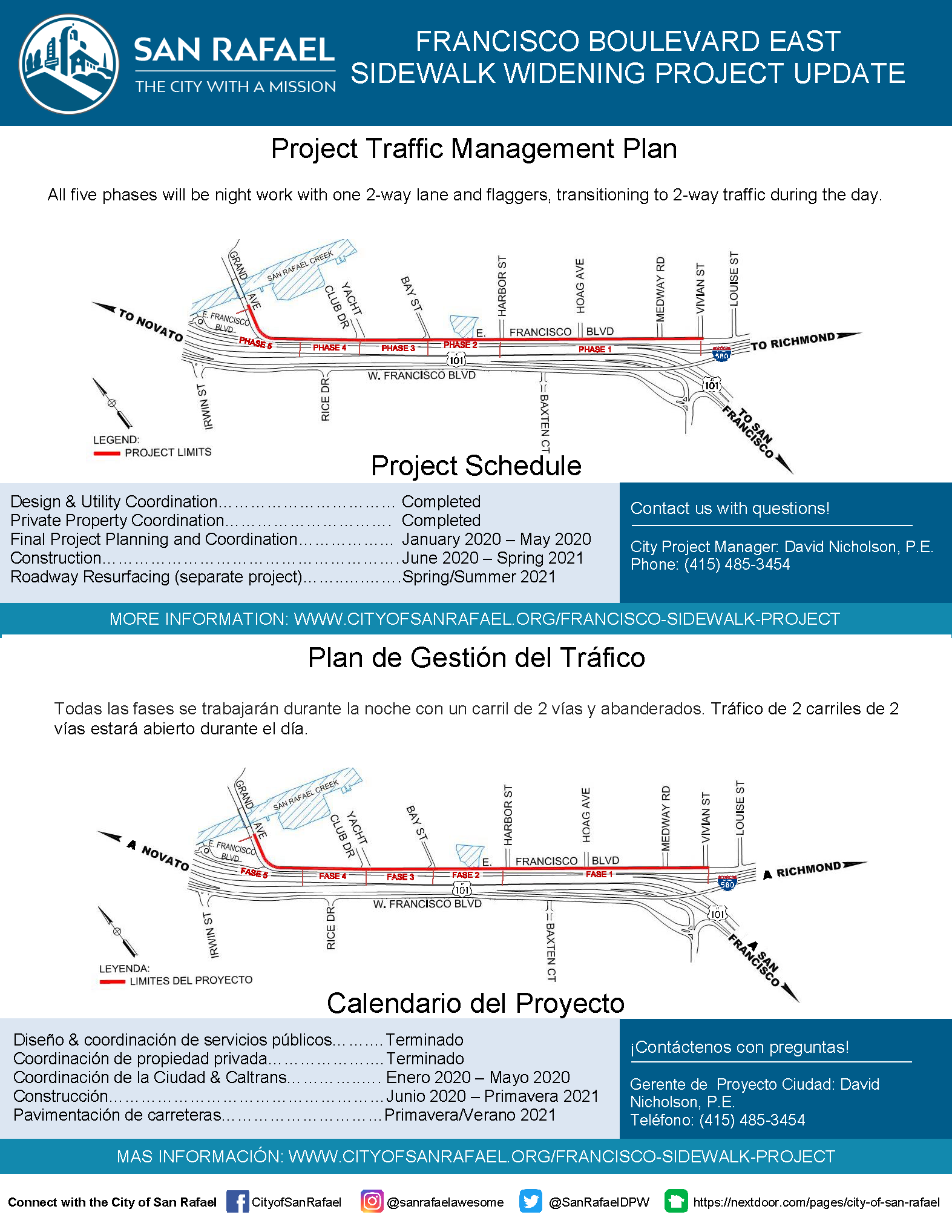 April 2020: The Construction Contract is out to bid for this project and Bid Open is scheduled for April 29th.  The project is on schedule with Construction planning to begin in mid to late June 2020.

February 2020: Construction is predicted to start at the beginning of June, 2020.  Construction operations will be broken into five Phases in an attempt to minimize traffic congestion and impact on local businesses.  During construction there will be some day-time work and some night-time work comprising temporary traffic diversions.

The day-time work will comprise a one-way lane southbound on Francisco Blvd East from Harbor Street to Medway Road and a northbound detour via Medway Road to Front Street to Harbor Street (see image above).  Temporary parking restrictions may be imposed on Front and Harbor Streets during this Phase, which is expected to take four to six months.  More details on this will be published as we near the time of Construction.

The night-time work will be broken into four Phases between Grand Avenue and Harbor Street.  During night-time operations there will be one traffic lane with flaggers for each Phase of work (approximately 500-feet each).  Two-way traffic will be restored during the day for normal operation of Francisco Blvd East and its side-streets.

Two-way pedestrian and bicycle traffic will be maintained on Francisco Blvd East throughout duration of all construction operations and as well as continuous access to driveways.

2019: Design, utility and private property coordination was completed at the end of summer 2019.  City staff has coordinated and will continue to coordinate with Caltrans as required for authorization to proceed with the construction phase.  Construction is still scheduled to begin early summer 2020.

In 2006, Congress established the Non-Motorized Transportation Pilot Program, in which specific counties across the nation, including the County of Marin, were awarded federal funds to design and construct facilities that would enhance and encourage non-motorized transportation. The City subsequently entered into an agreement with the County of Marin in 2007 to receive funding to design a widened sidewalk along Francisco Boulevard East between Vivian Way and Grand Avenue.

In 2008, the City retained Jacobs, an engineering consulting firm, to perform extensive public outreach and produce construction plans, specifications, and an engineer’s cost estimate that were advanced to approximately the 90-percent design level. In August 2013, when additional federal funding became available, the City retained another consulting firm, CH2M Hill, to obtain environmental clearance and bring the plans and specifications package to the 100-percent design level.  The City also obtained environmental clearance (i.e., NEPA) in 2014, at which time the project went dormant due to a lack of funding.

Out to Bid Information

The project was presented to the California Transportation Commission on December 5th and was approved for federal funding allocation.  Once we receive clearance from Caltrans to proceed with the project, we will be advertising for bids, which is anticipated by mid-January 2020.  The project is on schedule with a proposed construction start time of early summer...

The City has chosen BKF Engineering 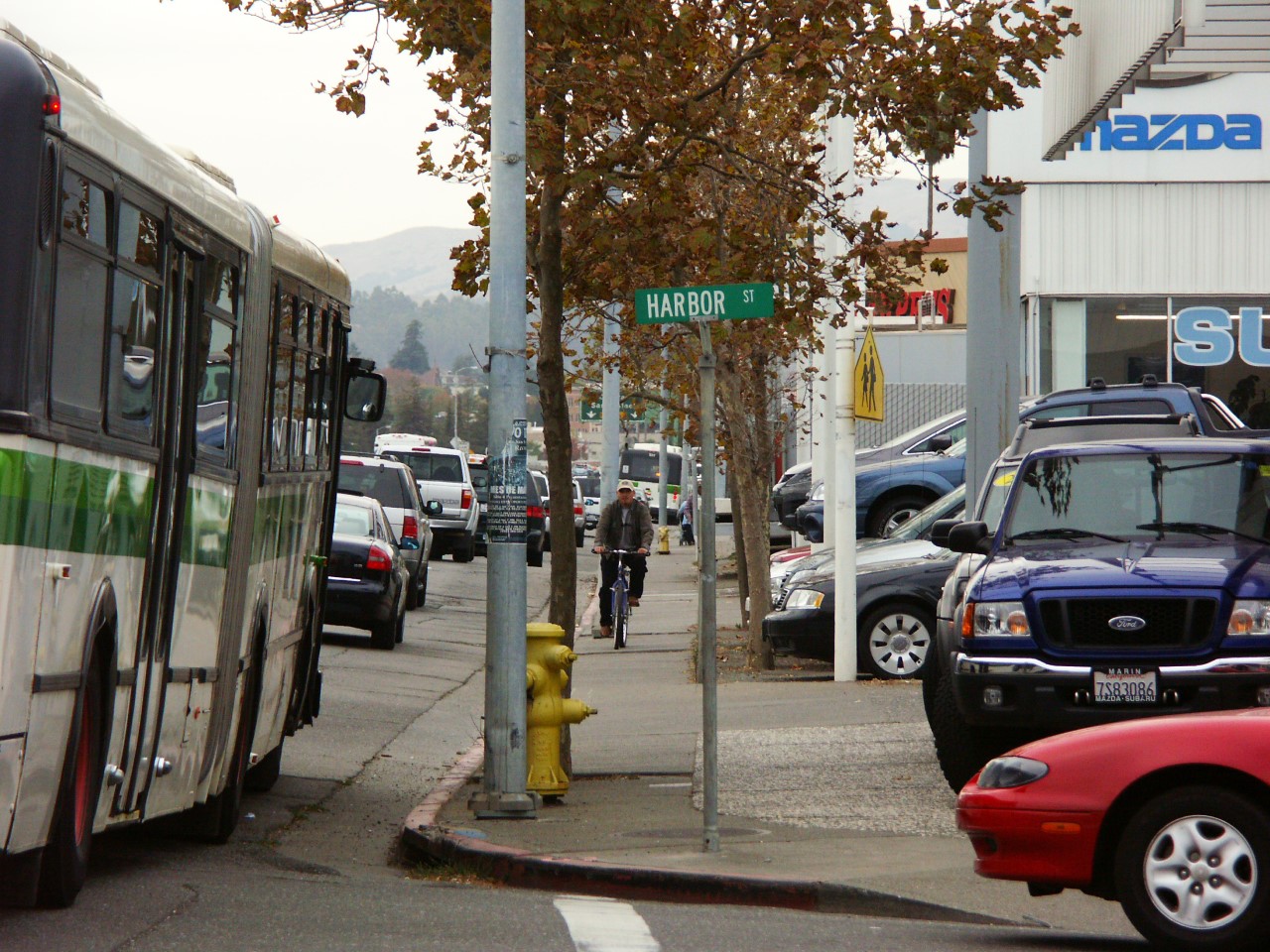 The MTC Board of Commissioners voted unanimously to program $4.025 million to the Francisco Boulevard East / Grand Avenue Bridge Pedestrian and Bicycle Connectivity project submitted by the City of San Rafael with support from the Transportation Authority of Marin. The City of San Rafael’s project was ranked No. 1 of the 14 projects in the Bay...
See more news posts

Will the new sidewalk be connected to the new Grand Avenue pedestrian bridge?

Yes, this path will connect with the recently completed Grand Avenue bridge.  The intent is to improve pedestrian and bicycle access from the Canal neighborhoods to downtown San Rafael.

Will existing parallel street parking along the frontages be affected and/or eliminated?

Some of the parallel parking will be temporarily inaccessible during construction, but there will be no elimination of existing parking spaces along the frontages.

Will any of the existing infrastructure (e.g. trees, landscaping, retaining walls, light poles, etc.) along the property frontages be altered or eliminated?

If any of the privately-owned infrastructure is within the Francisco Blvd East right-of-way and
are in the way of the new sidewalk, they will likely need to be moved onto private property or
eliminated. The City will work with property owners where this is necessary to achieve an
amicable solution

Will this work adversely affect my utility hookups or result in any disruption of services?

No, businesses and resident’s utility hookups will not be disrupted during construction.

Yes. The construction will likely be completed in short phases along the ¾ mile long stretch,
rather than all at once.

Will any portion of the new sidewalk encroach onto private property?

No. The new sidewalk will be entirely within the Francisco Blvd East right-of-way.