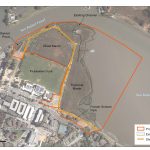 The Tiscornia Marsh site covers 20 acres of tidal marsh and bay lands located north and outboard of East Canal Street (APN 009-142-01).  The property, which is owned by Marin Audubon Society, is bound to the: a) south by a shoreline levee, Schoen Park (small City-owned park/playground) and Canal Street; b) west by the Albert J Boro Community Center and Pickleweed Park; c) east by the San Rafael Bay; and d) north by the San Rafael Creek.  The neighboring Albert J Boro Community Center and Pickleweed Park covers approximately 15 acres which includes an active community center, community park and an expansive playfield (APNs 009-032-06, 08 and 09).  Included in the City-owned holdings is an undeveloped, four-acre diked salt marsh, which is located north of the large playfield.  Although subject to flooding in the winter months, this diked salt marsh is enclosed by a perimeter level and contains a well-used, informal pedestrian trail, which loops through the area.  The Tiscornia Marsh and environs are presented in the attached Site Area Map.

The Tiscornia Marsh has experienced considerable erosion along its bay ward edge, which is attributed to direct wave action from the bay.  Over the last 30 years, approximately three acres of the tidal marsh has been lost to this erosion, which has dramatically impacted habitat for species such as the Ridgway’s rail and salt marsh harvest mouse.  Under current conditions, it is expected that this erosion will continue and will likely increase as sea level rises. The second critical issue for this general area is flooding.  The adjacent Canal neighborhood is low-lying and is currently at risk to coastal flooding (as well as sea level rise).

On January 11, 2022,  the Planning Commission certified the project EIR and approved the use permit and environmental design review permit.

Tiscornia Marsh would be restored to its former extents by beneficially reusing dredged material from local sources. A coarse beach would be constructed along the bay ward edge of the restored marsh to resist future erosion. Tidal action would also be restored to the City-owned diked marsh at the north end of Pickleweed Park. Altogether, the project would reconstruct approximately four acres of eroded tidal marsh, preserve, and protect the approximately eight remaining acres of Tiscornia Marsh, and restore approximately five acres of diked marsh by reconnecting it to tidal inundation. The Project would also construct a new 600-foot setback levee and improve approximately 1,100 feet of shoreline levee to achieve greater flood protection, public access, and habitat benefits. Major project elements include the: a) development of a course beach; b) reconstruction of the eroded tidal marsh; c) restoring the diked marsh to the bay; d) shoreline levee improvements; and e) development of an ecotone slope.