Prior to Fall 2020, Central San Rafael did not have detection at most of the intersections downtown. This meant that the traffic signals operated on a pre-timed schedule. Pre-timing is based on traffic volumes collected on one “typical” day and a team of engineers develops timing plans for the weekday morning, midday, and evening peaks and off-peak. In other words, signal timing for nearly 50 intersections for the next three to five years was dictated by one day of data that was supposed to represent the average day. Is there even an average or typical day in San Rafael?! We know traffic patterns change. We have witnessed this with the increase in work-from-home due to COVID-19. Also, since data was last collected for San Rafael re-timing, the SMART train started service to Larkspur, meaning a whole new disruption across Second and Third Streets.

Now that the City has 24/7 turning movement counts, we can better adapt to the changing conditions. Signal operations truly takes a team – from the video detection supplier to our in-field trouble shooters at DC Electric, to engineers ensuring that minimum standards are met. We are just scratching the surface with the technology that we have, and we hope to continue to make improvements for all modes- pedestrians, bicyclists, and vehicles.

Below are two images illustrating the progression on Third Street over a 15-minute period during the weekday evening peak (5 pm). The goal is to get bands that stretch from the bottom of the image (Irwin Street) to the top of the image (Shaver Street). The light purple band represents the platoon of vehicles making it down Third Street without stopping. As you can see in the image from April 7, the purple band is quite skinny and ends at C Street. The gap in the bands is a disruption from train pre-emption.

The figure from May 26 shows Third Street after offset adjustments were made. In this image, the purple band is wider and stretches all the way from Irwin Street to Shaver Street. 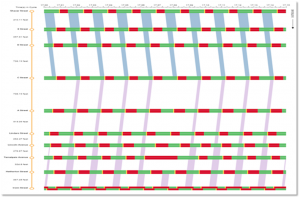 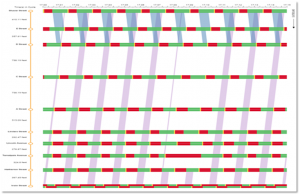