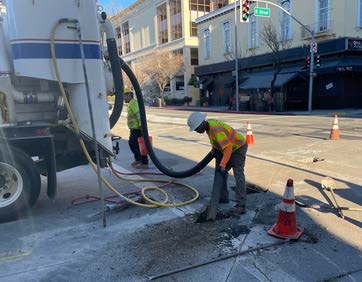 Ghilotti Bros. Inc., and St. Francis Electric will continue potholing to locate existing underground utilities at all the intersections for Second and Third Street.

Ghilotti Bros. Inc., will also be saw cutting and removing the median islands on Second Street between West End Avenue and Miramar Avenue.

IMPACTS: Traffic Controls (temporary signs, message boards, traffic cones, delineators and detour signs) will be put in place to direct motorists through the work area. Curb parking spaces will be marked “No Parking.” There will be intermittent lane closures on Third Street and detours on A Street, C Street, D Street, E Street, and Fourth Street.