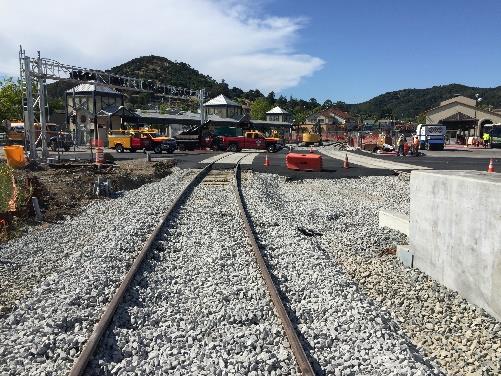 One of the busiest arterials in Marin was closed last weekend to allow the Sonoma Marin Area Rail Transit (SMART) to  construct a double track section across 2nd Street. The roadway was closed on Friday night at 8:00 pm and reopened on Sunday afternoon at 5:00 PM.

The closure involved multiple stakeholders from Golden Gate Transit to law enforcement officers from San Rafael and the California Highway Patrol. Changeable message signs alerting the public of the closure were placed more than a week in advance of the work and significant social media notification was coordinated through the City’s Digital Services and Open Government Department as well as SMART. While a significant effort was made by all parties to alert the public of this work, vehicle backups and congestion did occur mid-day on Saturday and Sunday. San Rafael PD and DPW were present to assist people who were delayed and to offer additional directions to get through the City to their destinations.

SMART anticipates closing 3rd Street this coming weekend, June 7th, 2019 starting at 8:00 PM, to connect the rail system to the Downtown Station. West bound detours will be routed to 4th, 5th or Mission Streets. Additional assistance from San Rafael PD and other law enforcement officers will be present when heavy vehicle volumes are present which tend to be in the mid-day period. Golden Gate Transit will be modifying their drop off area during this closure to accommodate the construction. SMART will be providing on site assistance to patrons using transit including access to Airporter services. In addition, SMART’s rail service to downtown will be halted during this work. A bus bridge from Civic Center Station to the downtown will be provided by SMART for this weekend’s closure. 3rd Street