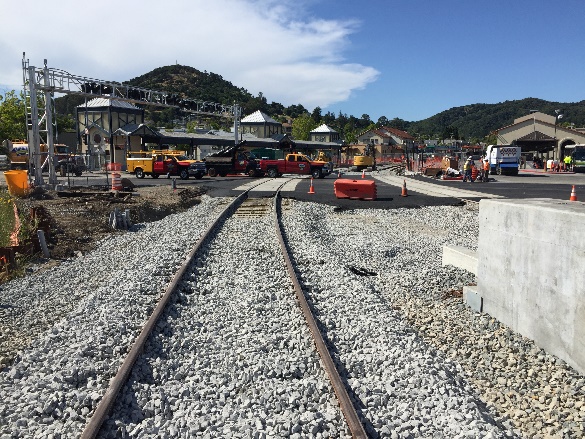 Though the first phase of the MUP is done, Sonoma Marin Area Rail Transit district (SMART) is continuing to construct the extension to Larkspur Station, located behind Larkspur Landing. While the majority of the infrastructure, such as rail and ties are in place, SMART is testing the systems that support the rail service. On July 18th, SMART tested the flashing red lights across Third Street and Second Street. There are two types of testing that SMART utilizes: static and dynamic. Static testing of the rail equipment includes having the gates drop on the crossing and activating the flashing lights. Dynamic testing consists of running a locomotive on the newly constructed rail section to Larkspur, and it is predicted to begin in mid-August. SMART anticipates several months of testing the train with revenue service starting in late 2019 or early 2020. San Rafael is also pursuing a quiet zone for the Larkspur Extension.