PG&E Gas Transmission Line
Several very large utility projects were initiated by PG&E within the City throughout the summer. The most visible PG&E project is located on Second Street, Lindaro Street, Andersen Drive, Irwin Street, Woodland Ave, Du Bois Street. PG&E is replacing a gas main from around A Street through the Bret Harte neighborhood. Seventy-five percent of the pipe is under ground. While the replacement of the main has had a huge traffic impact throughout the summer the project is important to PG&E as well as residents as it replaces a very old and antiquated gas system. Main replacement work included opening a large section of the public roadway system to install and test the new system.

This week PG&E’s contractor, ARB, has finished the majority of installation and welding the new system. They have performed a hydrotest – which included filling the new system with pressurized water for a continuous eight hours to see if there were any leaks – on the southern half of the system through the Bret Harte area. The test was successful and allows ARB to backfill the trenches on the south area and begin resurfacing in the upcoming days.

There will be additional work needed on Second Street since the new gas main conflicts with other existing features such as the traffic signal poles at Second and A Streets. A hydrotest is scheduled for the middle of October for the system that runs down Second Street. ARB is anticipating that this work to be completed by the end of October.

Grand Avenue Gas Main Replacement
Over the last summer, PG&E has also been working on replacing a gas main which is located on Grand Avenue, Fifth Avenue, Fourth Street and Irwin Street. The actual gas pipeline work was completed in August. The final paving and street restoration was completed this past week. Final striping is yet to be completed.

Second and Lindaro – Night Work
PG&E also has a project specifically at the corner of Lindaro and Second Streets. One of PG&E’s connector gas mains which is located more than 12 feet below the surface needs replacing due to its age. PG&E’s contractor has been working at night to expose this deep system and has had difficulty working their way around other utilities that occupy the same space. PG&E has had the roadway closed at night from 9:00 pm to 5:00 am. During the course of construction an existing older sanitary system was discovered in the area such that San Rafael Sanitation District will also need to perform some work in this area over the next few weeks to repair their older system. Due to the complexity of the work and the coordination needed between multiple utilities this work is not anticipated to be completed until Thanksgiving. 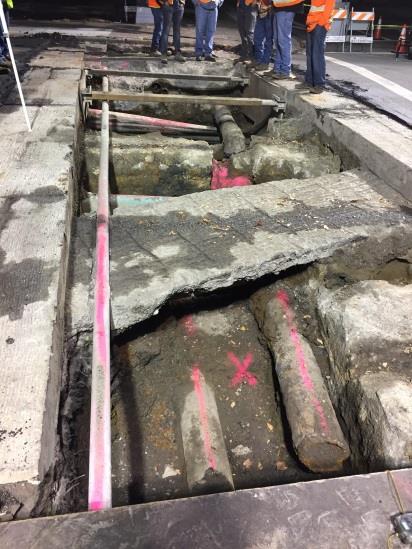