Even as the growth rate of San Rafael’s housing stock has slowed, demand for housing has persisted and increased. In 2013, the Association of Bay Area Governments, which sets regional growth targets through the Regional Housing Needs Allocation (RHNA), forecasted a 5% growth in households in San Rafael for each decade from 2010 to 2040. This growth rate means that San Rafael’s 57,700 residents in 2010 will increase to 68,700 by 2040. If the rate of new housing creation is lower than the rate of population growth, then supply and demand will continue to diverge, and housing prices – in both the ownership and rental markets – will continue to rise.

This dynamic reveals a crucially important link between the ownership market and the rental market. If more and more of a household’s income is directed towards increasingly expensive rents, while at the same time the cost of becoming an owner also continues to rise (e.g. the cost of a down payment will continue to rise as prices rise), it becomes increasingly difficult for renters to become owners.

There are a variety of challenges to creating more supply in the ownership market. As a follow up to the San Rafael Community Development Director’s August 20, 2018 “Housing Update” Report, in 2019 Community Development staff will be returning to Council to discuss local “Barriers to Housing Creation.” Additionally, there are a variety of new state laws and funding mechanisms that have been recently adopted or that are currently under consideration in the Legislature, which could also significantly impact the overall housing stock in San Rafael. Whether these changes are occurring at the local or state level, any impact to the housing supply will occur on a medium to long-term time horizon. In the meantime, aside from simply being unable to become owners, there will continue to be urgent challenges for renters in our community.

Housing overpayment, as defined by the state and federal government, refers to spending more than 30% of income on housing. According to a 2018 report from the Marin Economic Forum, the majority of low-income renters in Marin County fall within these definitions of housing overpayment. 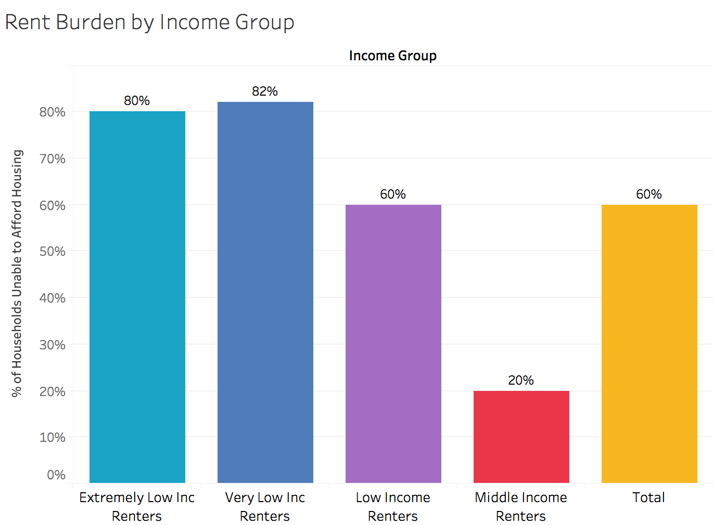 The vacancy rate refers to the number of available housing units – for sale or rent – available at any given point in time. According to the City of San Rafael’s Housing Element, “A low vacancy rate may indicate that households are having difficulty in finding housing that is affordable, leading to housing overpayment and/or overcrowding.” Additionally, in rental markets with low vacancy rates, tenants without viable housing alternatives might end up choosing to reside in rental units with deficiencies that affect the habitability of the property. The City of San Rafael does have a Housing Inspection Program to get such deficiencies corrected. According to the Marin County Community Development Agency, the rental vacancy rate in Marin County is currently below 3%. A healthy rate is closer to 6 to 7%.

According to the San Rafael Housing Element, more than 87% of those employed in San Rafael reside in other cities, which implies a significant jobs / housing imbalance.  Affordable workforce housing is needed for those who contribute vital services to the City but whose incomes limit their ability to obtain affordable housing in San Rafael. Examples of workforce occupations priced out of the local housing market include nursing assistants, elementary and high school teachers, as well as many public employees.

According to Marin County’s 2017 Homeless Point-in-Time-Count, the leading reason people cited for becoming homeless was “economic issues” (42%). According to the same study, currently homeless persons cited the top three forms of assistance needed for exiting homelessness as housing-related: rental assistance (62%), more affordable housing (60%), and money for moving costs (46%). In 2018, fully 100% of the people who have been placed in housing through the Marin County Continuum of Care moved into a rental arrangement, not an ownership arrangement.