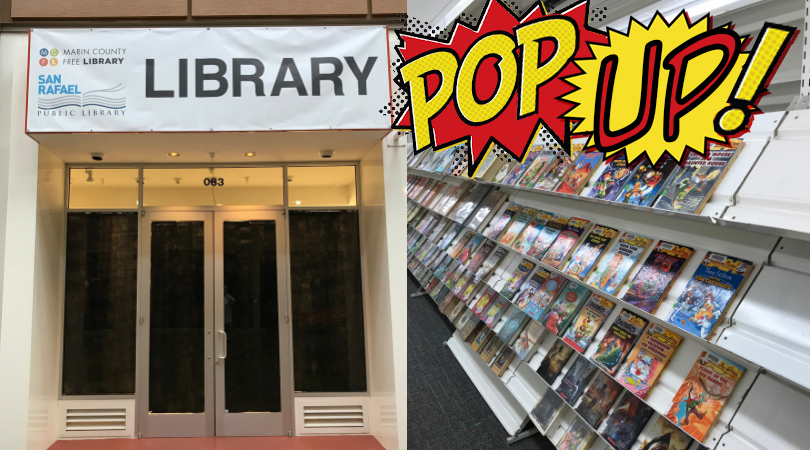 As a special holiday season treat, the Marin County Free Library (MCFL) and San Rafael Public Library have partnered to create a temporary pop-up library space at the Northgate mall in San Rafael. The location planned a soft opening to start at noon December 7.

Working with Merlone Geier Partners, the new mall owners, and MCFL Director Sara Jones, the San Rafael Public Library staff arranged to occupy an empty space in the mall during the month of December. Merlone Geier Partners provided the available space – a former shoe store – as of December 1 at no cost for the month of December, and MCFL provided library materials from its distribution center and assisted with staffing the location.

“This is a wonderful collaborative opportunity to serve our community with expanded library services,” Jones said. “The partnership uses assets from both libraries – materials, technology and people. We’re providing our services where people already are: shopping, eating and enjoying entertainment at Northgate.”

Henry Bankhead, San Rafael’s Interim Library Director, added: “We would like to capture the imagination of the community about how these collaborating agencies can work together to promote libraries during the busy holiday season,” Bankhead said. “This is a great way to use existing resources to test out how a mall-library partnership will work in North San Rafael by building on the existing relationship between the Marin County Free Library and the San Rafael Public Library.”

Patrons may check out books and other media, pick up items on hold, drop off checked-out materials, use the 3D printer and participate in some other programming options. Bankhead plans to staff the location during peak mall hours to maximize the pop-up library’s impact.

The library hours are Mondays through Thursdays from noon to 8 p.m. and Fridays through Sundays from noon to 5 p.m. Although the planned final day for the location is Sunday, December 31, organizers said they would pursue a longer stay if the experiment is deemed a success.