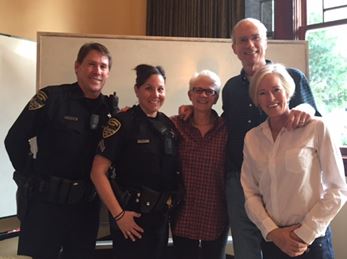 Dominican’s community online forum, NextDoor, recently had discussion threads regarding the impact of homelessness on their neighborhood. At the invitation of the HOA, Mayor Phillips, Vice Mayor Colin as well as Corporal Reese and Officer LaPlante met with neighbors at Dominican University on Sunday, February 21st. They shared information about City and County initiatives as well as listened to ideas about specific actions that would benefit the neighborhood. Regarding suspicious behavior, residents were encouraged to call the San Rafael Police Department as appropriate because having neighborhood ‘eyes’ on the community benefits everyone. Dominican HOA members expressed an interest in getting to know their beat officers and suggested that s/he attend the May Annual meeting. Areas to further explore focused on the Coleman Overpass as well as the Coleman School. This meeting was intended to be neighborhood-specific and it was suggested that San Rafael hold a Town Hall similar to the one held in June 2015 and invite the County to co-host.

Residents can help by reporting observations that appear unlawful or unsafe so the Police can respond. Emergencies should be sent to 9-1-1 and non-emergencies called into (415) 485-3000.