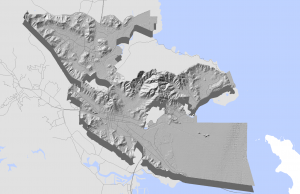 Every 10 years, local governments use new data from the Census to redraw their district lines to reflect how local populations have changed. State law requires cities and counties to engage communities in the redistricting process by holding public hearings and doing public outreach, including to underrepresented and non-English-speaking communities. We are asking for your help to plan, draw, and redivide new City districts.

In 2020, San Rafael held our first district-based City election following the approved transition in 2018.  Previously, all five Councilmembers, including the Mayor, were elected at-large, meaning that all registered voters who reside in San Rafael had the opportunity to vote for all five City Council positions. Under the new district-based election system, four Councilmembers were elected by district: Councilmembers were required to live in the district they represent and were elected only by the registered voters of that district. The Mayor will continue to be elected at-large. Below you will find out approved district map from 2018, and information about district elections.

Find your District by address

Why did the City of San Rafael transition to district elections?

In 2002, the Legislature enacted the California Voting Rights Act (CVRA) (Elec. Code §§14025 – 14032), which prohibits California public agencies, including municipal governments, from imposing or applying an at-large election method “that impairs the ability of a protected class to elect candidates of its choice or its ability to influence the outcome of an election” (Elec. Code §14027). A protected class is defined by the CVRA as “a class of voters who are members of a race, color, or language minority group, as this class is referenced and defined in the federal Voting Rights Act of 1965”.

In a lawsuit brought pursuant to the CVRA, a plaintiff who establishes a history of “racially polarized voting” under a city’s at-large election system can require a city to change to a district-based election system. This past November 2017, the City received a letter (English/Spanish) from an attorney, asserting racially-polarized voting in San Rafael. On January 16, 2018, the City Council adopted a resolution outlining its intention to transition from at-large to district-based elections, which included specific steps the City will undertake to facilitate the transition, and an estimated time frame for doing so. The CVRA provides that the City must adopt an ordinance implementing district-based elections within 90 days, or by no later than April 16, 2018.

How were district boundaries created?

Below was the criteria used for creating districts:

How were the composition of the districts decided?

Before drawing a draft map or maps of the proposed boundaries of the districts, the City Council held at least two public hearings over a period of no more than 30 days, where the public was invited to provide input regarding the composition of the districts.

After all draft maps were drawn, the City published and made available for release at least one draft map and, if members of the City Council were to be elected in their districts at different times to provide for staggered terms of office, and the potential sequence of the elections.

After the draft map or maps were published, the City Council held at least two additional hearings over a period of 45 days, where the public was invited to provide input regarding the content of the draft map or maps and the proposed sequence of elections. The first version of a draft map was published seven days before consideration at a hearing. If a draft map was to be revised at or following a hearing, it must have been published and made available to the public for at least seven days before being adopted.

The City Council held a fifth public hearing prior to adoption of the ordinance that established the boundaries of the four election districts for City Council elections beginning with the November 3, 2020 election.

How did the community participate in the decision-making process?

Send your comments to the City here.

How often are the voting districts reviewed?

Districts are reviewed every ten years, following the Census.