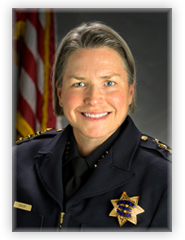 Chief Bishop grew up in Los Altos and began her law enforcement career in 1985 when she joined the Santa Clara Police Department as a patrol officer. She rose through the ranks, promoting to Captain in 2006, and served in a wide variety of assignments during her 26 years with Santa Clara.

Chief Bishop received her Bachelor’s degree in Public Administration from the University of San Francisco and holds an Executive Master’s degree in Public Administration from Golden Gate University. She is a graduate of the FBI National Academy Class 219; and a 2013 graduate of the Senior Executives in State and Local Government program from the Harvard Kennedy School.