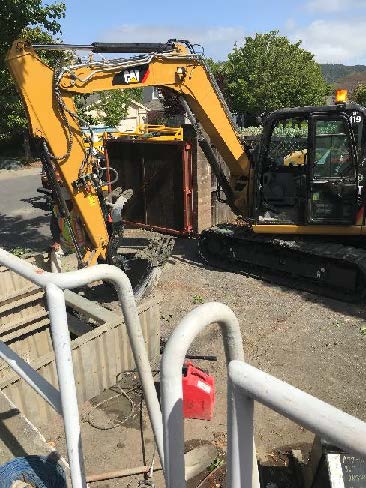 The Cayes Pump Station is a small drainage pump station that manages the drainage in the Spinnaker and Baypoint neighborhoods in the Canal. This pump station also manages the water levels in the adjacent pond which fronts both neighborhoods. Over the last winter, which was wetter than normal, a significant leak in the pipe outfall was discovered adjacent to the station. The outfall system crosses several private property driveways and roadway before out falling to the Bay. DPW and a local contractor worked this week to expose the outfall section of the discharge pipe. A separation was discovered between the station and the outfall system most likely caused from differential settlement in the area which is common in this part of town. DPW crews working together with a local contractor are repairing the damaged section of outfall pipe and will be sealing the separation in the pipe system to minimize future pressure leaks. Luckily, this repair is isolated to the area near the pump station and full excavation of resident’s driveways and the roadway are not needed at this time.