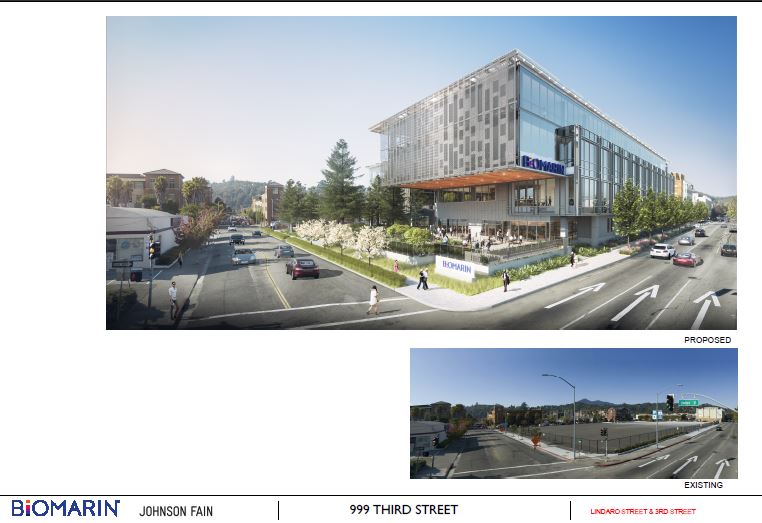 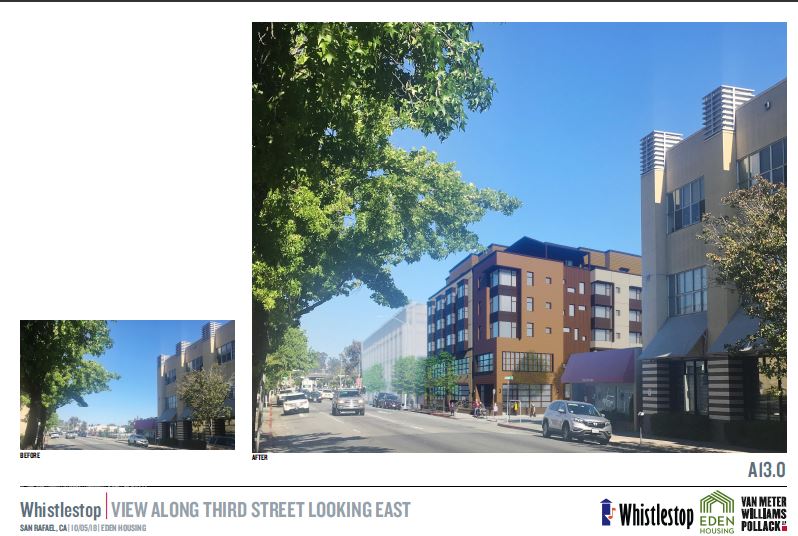 BioMarin, in conjunction with Whistlestop/EDEN Housing, submitted a planning application for a proposed development on 999 3rd Street in downtown San Rafael. The project site, between 2nd and 3rd Streets (at the corner of Lindaro), is approximately 133,000 square feet in size.

The property owner, BioMarin, proposes to construct two, four-story 72’ tall buildings for the purposes of laboratory/R&D and general office spaces. BioMarin’s buildings would each be four stories, but with large floor to ceiling heights to accommodate infrastructure and facilities for their laboratory/research & development needs.

The formal application requires review and approval by the Design Review Board and the Planning Commission and ultimate approval by the City Council for in order to proceed.

The application includes the following:

Whistlestop’s portion of the project also proposes the following concessions:

The Whistlestop portion of the project would include a requested 16-ft height bonus and density bonus as concessions under the State Density Bonus law and the City’s density bonus provisions.

The project was then reviewed by the Planning Commission on May 14, 2019 as a study session and then by the Design Review Board as a formal application on June 18, 2019. The DRB will hold a follow-up review on the recommendations made during their June 18th meeting on August 20, 2019.

Concurrently, the City of San Rafael has contracted with Amy Skewes-Cox to prepare an Environmental Impact Report (EIR) pursuant to the California Environmental Quality Act (CEQA). The EIR evaluated potential project impacts for areas of environmental concern such as, visual impacts, traffic and circulation, air quality, noise, greenhouse gas emissions, hydrology and drainage, and hazardous materials. A scoping meeting to receive agency and public input regarding the EIR was conducted on March 12, 2019.

The Draft EIR was completed and published for a 45-day public review period, commencing on Friday, August 9, 2019 and ending on Monday September 23, 2019 at 5pm. The public review period concluded with a public hearing before the Planning Commission on Tuesday, September 24, 2019. The Commission accepted all written and oral comments and directed staff to prepare the Final EIR.

The Final EIR has been completed and released for public review on January 13, 2020 The Planning Commission conducted a public hearing on Tuesday, January 28, 2020 to consider the Final EIR, along with the project merits and planning applications and provide their recommendation to the City Council..In conclusion, the Commission adopted seven Resolutions recommending approval of the project  to the City Council.